Greven - At water and at land

In the heart of the Münsterland – only 15 km north of Münster – one can find the young Emstown Greven with ca. 35 500 habitants.
Besides a manifold choice of retail and gastronomy the large village fairs and the diversified choice of culture and sports aid the urbanity of the traditional market place. In addition, the green ambience is worthwhile to visit. In the comfortable inns, hotels, pensions and holiday flats the typical hospitality of the Münsterland will cross your way. Round-about 4 km south of the centre the knobby village Gimbte with his cultivated gastronomy activates a lot of excursionists. In Greven-Reckenfeld (ca. 9000 habitants) the performances of the open air-theatre in the summerterm inspire many thousands of visitors annually.

The floodplains of the Ems

The manifold landscapes of the floodplains of the Ems and of the parks, a close network of well-known and attractive tours by bicycle, for example the EmsRadweg and the 100-castles-route, as well as the nature-protected Ems are the ingredients for active free time-enjoyment in the open countryside. Explore the scenic environs of Greven by bicycle and canoe!

Greven has got best connections. Either by train or by bus, across the autobahn A 1 or even by plane starting at the Münster-Osnabrück-International-Airport – you can reach us directly!

The tourist office Greven willingly informs you about the choices of free time and holiday-offers in and around Greven. Also, the free agency of apartements and holiday-flats is part of our service. We look forward to your visit!

Church of the city and market "St. Martinus"

The church of the city and the market was founded by the holy Liudger, first bishop of Münster, who was assigned to evangelize the "Münsterland". The first building of the church made out of stone was built in 12th century. Parts of the mighty peel still remain from this time. In the 15th century, the nave was rebuilt and in the 19th century it was expanded.
At the church’s southern wall one can find a sundial from 1616. Worth seeing inside the church is the "group of crucifixion" by Philipp Gröninger, a sculptor from Münster, from 1722. In 1964, tendrillar ornaments of the Middle Ages were bared in the arch of the left aisle.

The Hoek – the oldest part of Greven

The view of a place of Greven still shows a lot of the history of development of the old market place. The Hoek is the oldest still remaining place of Greven. In the 17th century the Hoek (Low German: corner/bracket) originated as an expansion of the residential area in grown form, i.e. unplanned. In the Hoek the old Greven is still existing with its typical farmhouses like one can still find on the street "Marktstraße" (e.g. pizzeria Gallo d’Oro).

The first "real” citizens came to Greven with the industrialization. That’s why the next type of house is the industrial mansion (examples can be found on the street "Marktstraße" with the mansions Biederlack, Schründer, Kalbhen). Patrician houses are missing, as they can be found, for instance, in Münster.

In 1986 the fountain with the "Emspünte" on the street "Alte Münsterstraße” was adapted by the tourist office. The model of the ship remembers of the "Püntenschifffahrt" in old times on the river Ems. This extended from Greven to the coast of the North Sea. It reached its bloom in the 16th and the 17th century. In 1855 with the building of the railway the "Püntenschiffahrt" came to its eternal end. Since the mid seventies Passages and pedestrian areas ("Alte Münsterstraße", "Marktstraße") developed while the center of Greven was rehabilitated. The new buildings fit in with form and dimension in the old conditions. Noteworthy are the many interesting details of the gables and facades in the passage and the street "Martinistraße". In 1993 the fountain on the marketplace was initiated, which shows a baptizing of men with the help of artful figures. By passing the protestant church one can get over the "Wilhelmplatz" to the "Niederort". It got its name because of a flat that emperor Wilhelm II. had to deal with in 1907 while passing the place of today’s "Wilhelmplatz".

The name "Niederort” comes from the German expression "Nierodde", which means something like "new clearing". This shows that the place was populated relatively late. So the name doesn’t have any connection to the place opposite of the street "Marktstraße", which is lower. The population of the "Niederort" depended on the reopening of the "Püntenschiffahrt" in 1582. On the southern endpoint of the "Emsschifffahrt", carpenters, craftspersons and chandlers settled down. Today the "Niederort" is often a meeting point for live events.

Centre of culture GBS and Kunstturm

The first textile companies of Greven seeked closeness to a river, for example the oldest company, the Grevener Baumwollspinnerei (GBS), a cotton-spinning mill, founded in 1855 and closed in 1993. Now, the Grevener Baumwollspinnerei is a centre of culture and education. Numerous artists are attracted by the unique ambiance in the Ballenlager and the intimate atmosphere in the Kulturschmiede in the cultural heart of Greven. Remarkable are also the exhibits that take place in the Kunstturm at the street Kirchstraße, which the Kunstverein can now call its extraordinary domicile. Open air theatre "Reckenfeld" A good reputation among the open air theatres of the country was gained by the open air theatre Greven-Reckenfeld of the Münsterland. There are two plays featured in each season from May till September annually. In the wintertime, the theatre is touring with a winter play through the whole Münsterland.

The church of the village "Gimbte" and the old canal-viaduct

The church of the village "Gimbte" contains lots of treasuries, among other things one of the oldest baptisteries in the Münsterland (12th century). Not far from the village is the nature-sanctuary "Bockholter Berge" with a juniper heathland. Abroad here, Herman Löns came first in contact with the Low German tradition. The "Lönsstein" – a large erratic block- reminds of the regional writer.
A technical cultural monument is located east of the forested dune in form of the old canal-viaduct "KÜ" over the river "Ems" (built in 1899).

The army repository on the "Höping-Pellengahr" farm refers with its embrasures to unsettled times. Not far from the farm at the bridge over the river Ems one can find a few relics of the walls and ditches of the once powerful customs castle "Schöneflieth".

Location
about 15 km north of Münster, and about 40 km south of Osnabrück

Reckenfeld is located 9 km north of Greven. It is Greven’s latest district with a population of 8 000 inhabitants.

Gimbte with a population of 900 inhabitants can be found 4 km south of the town.

In immediate neighbourhood, the nature-sanctuary Bockholter Berge and the European reservation for water birds – the Rieselfelder – can be found.

Climate
Mild winters and comparatively cool summers characterise the climate of the Münsterland which is affected by the Atlantic.

The cold air from the East is often obstructed by the Weserbergland and the Teutoburger Wald. With about 1 600 hours of sunshine per year this area belongs to the sunniest ones in northern Germany with the exception of the coasts of the North Sea and the Baltic Sea.

Markets and fairs in Greven

Throughout the year many variegated and attractive events, fairs and markets take place in Greven’s town centre and in the centres of Gimbte and Reckenfeld.

Farmer’s markets:
In Greven: Wednesdays and Saturdays from 7 am to 1 pm at the marketplace.
In Reckenfeld: Thursdays from 8 am to 12 am in the town centre.

Flea markets:
On every first Saturday of the month at the Alte Münsterstraße in Greven from March to November

In the south: The Bird Europe Reservation Rieselfelder, Münster and the water castle Hülshoff

In front of the gates of Gimbte, a district of Greven, the Bird Europe Reservation Rieselfelder (steady exhibit in the biological station), a rest and breeding area for mudflat and water birds from all over North Europe, is situated.

Greven is located only 15 km north of  Muenster, a city with a worth-seeing old town around the Prinzipalmarkt, the Barockinseln of Muenster with the Erbdrostenhof, the Church "Clemenskirche" and the castle, the Friedenssaal in the historical town hall, the Allwetterzoo, the open-air museum Mühlenhof and the Westphalian museum of natural history with the attached planetarium at the lake "Aasee".

In the southwest of Greven one can find the birthplace and domain of the poetess Annette von Droste-Hülshoff, Haus Rüschhaus and the water castle Hülshoff.

In the district of Saerbeck the deer park "Nötleberg" can be found, which is home to homelike and foreign animals. In addition, the lake "Waldsee" (with public swimming bath) is worth a visit. The cliffs "Dörenther Klippen" and the hiking trail "Hermannsweg" (northern part of the forest "Teutoburger Wald”) are also close by. The toboggan run (for summer) and the theme park "Märchenwald" near the city Ibbenbüren are other popular places for excursions.

the silent lanes and paths of the farming communities "Schmedehausen" and "Bockholt" are especially inviting for bike tours. 20 kilometres afar from Greven, the picturesque place of pilgrimage Telgte can be found.

one can find many beautiful "Gräftenhöfe" in the area of Nordwalde, for example, the Bispinghof and Hof Reckfort. The leavings of the canal "Max-Clemens-Kanal" reminds of the efforts of sovereign bishops Clemens August and Maximilian von Rothenfels, who wanted to build up a shipping connection to the North Sea. The shipping began in 1724 but was stopped in 1840 because of the frequent water deficiency. In 1899 this project was realized with slight changes in its form and function by the opening of the canal "Dortmund-Ems-Kanal".
Translation by: Anja Nienhaus, Evrim Camuz, Sabrina Vennemann, Lisa Brocks, Katrin Klinge, Sven Mehlitz, Tayfun Sengül, Maria Beckersjürgen, Maike Lambertz, Claudia Lanfer, Lara Holtkamp, Nina Wortmann, Dana Marie Alkarech, Sina Schipp, Anna-Sophie Althoff, Daniel Ickerott, Alexander Kastner, Juri Drunkenmoelle, Julian Jirsak, Alexander Roedeler, Stephan Roeppnack, Christian Ruhkamp, Serkan Taskin, Jason Marx (E-LK 12, Gymn. Augustinianum, Schuljahr 2006/2007).

Impressum und Datenschutz
The Hoek – the oldest part of Greven 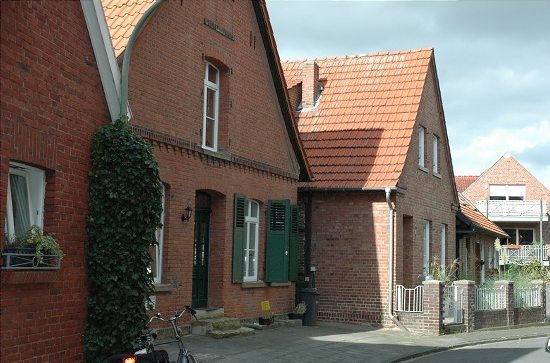